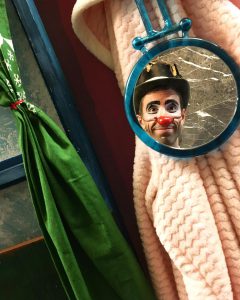 “With his elastic face, manic, impossible expressions and a body apparently strung on wires, Nick Arnold, evoking Jerry Lewis, was a comic wonder.”

From conferences to fundraisers to formal entertainment and public talks, Nicholas has performed at The Orillia Opera house, The Elks Opera House & Hacienda Del Sol Resort in Arizona, The Georgian Bay Hotel and Conference Centre, Hart House Great Hall and many more–bringing his nostalgic style, charm and humour to audiences from all over.

A skilled pianist and physical comic, Nicholas self-produced, wrote and starred in the one-man show “A Tribute to Jerry Lewis“, performing it in The Gordon Lightfoot Auditorium at The Orillia Opera House and the Regina Rosen Auditorium at The Kingston Grand Theatre.

Nick’s fascination with Jerry Lewis stems back to when he was thirteen-years-old–when he began publicly performing, honing and crafting his tribute to the late comedian. He cut his teeth performing in retirement homes and long-term care, eventually making his way to the larger theater circuit. Nick performed in Lonely Street Productions’ “The Best of Dean Martin & Jerry Lewis“; a 2013 7-city concert tour in Arizona.

A filmmaker and a writer, Nick has written, directed and produced two feature films and countless shorts. He self-produced the podcast mini-series, “Paying Tribute” — a look at the world of nostalgia entertainment. He speaks in high schools on the topics of leadership, creative ambition and tackling goals.