Martin & Lewis: The Story We Tell

a timeline of stardom

1945 – Dean Martin and Jerry Lewis meet for the first time

1956-1960 – Jerry Lewis stars in a number of films for Paramount Pictures and begins to emerge as a celebrated director (later directs such hits as The Nutty Professor).

1976 – Dean Martin & Jerry Lewis are reunited on the MDA Telethon.

Martin and Lewis were an American comedy duo, comprising of singer Dean Martin and comedian Jerry Lewis. They met in 1945 and debuted at Atlantic City‘s 500 Club on July 25, 1946; the team lasted ten years to the day. Dean Martin is the stage name of Dino Paul Crocetti, born June 7, 1917, in Steubenville, Ohio, while Jerry Lewis is the stage name of Joseph Levitch, born March 16, 1926, in Newark, New Jersey.

The manic and unique style of Martin and Lewis ushered in a new era of musical comedy that has inspired musicals, movies and comedy acts in the decades since they reigned over nearly every medium of entertainment.

Their fortuitous beginning occurred on a sidewalk in Manhattan in 1945. At the time, Lewis was 18-years-old; a struggling comic who had perfected ‘The Dumb Act’ (a common lip-sync routine of the vaudeville era). Martin; 28, a former boxer, doorman, blackjack dealer and now–struggling–crooner had recently filed for bankruptcy. They were introduced by a mutual friend and acknowledged the fact that they occasionally performed together on the same nights as part of variety acts at various venues. In accounts detailed by Lewis in later interviews and books, Dean was dressed in a camel hair coat, a cigarette hanging under a near-perfect nose job which Lewis noticed immediately. Lewis was struck by how much the struggling singer oozed calm, graceful confidence. For a few years, they crossed paths, never sharing the stage–only, occasionally, the same billing. In most cases, Lewis would arrive in town just as Martin was leaving.

Prohibition in the 1920s had ushered in a new era for under-the-table dealings and the once celebrated ‘under-belly’ of entertainment. Most nightclubs and music venues in the mid-1940s were run and operated by mobsters or those otherwise associated with organized crime. This included the famous Havana-Madrid where, in March of 1946, both Dean Martin and Jerry Lewis were booked as separate entertainment acts on the same nights. Here the two men grew in their professional friendship, sitting in on each others acts and, occasionally, if the mood felt right, calling out a harmless heckle for a laugh. After the standard set of shows, the performers would often hang around until the early morning hours. At this time, they would do what was commonly referred to as, ‘the late show’; an informal, often improvised hour or two of goofing around where they shared the stage and ribbed on each others’ acts. Here Dean and Jerry shared the stage for the first time, completely undocumented, unrecorded and unaware of the legacy they would soon be creating.

The Havana-Madrid engagement lasted one week. Neither Jerry nor Dean thought anything would come of their antics (although Lewis has stated in some books that he immediately recognized their collaboration as ‘lightening in a bottle‘). It’s perhaps more likely — and slightly more realistic — to assume that neither man had the foresight to immediately make themselves into an act. In actuality, that wouldn’t happen until a few months later.

In July of 1946, Jerry Lewis had been booked to play a weeks-long engagement at The 500 Club, owned by Skinny D’Amatao, a pop-culture figure credited with creating and nurturing the entertainment-side of Atlantic City–with rumours of mob-ties abounding. Lewis got along well with Skinny, but struggled to strike a connection with Skinny’s associates; in particular, a brute named ‘Wolf’. Wolf criticisized Lewis’ dumb act and felt its name was well suited to the performer.

At some point during Lewis’ engagement, someone was needed to ‘fill the bill’ for an ill performer. According to Lewis, it was he who recommended his friend Dean Martin to Skinny. Skinny didn’t want another crooner–an act that was a dime-a-dozen back in the 1940s and Martin, although extremely talented in his own right, wasn’t necessarily standing out from the competition. Lewis insisted, suggesting that he and Martin did ‘funny stuff together’. Skinny couldn’t pass up the opportunity to book a comedic duo.

On July 25th, 1946 Dean arrived at the 500 Club for his first night. Both Lewis and Martin played it safe. Lewis did his act to little or no applause, Martin came on later in the night to do his. It was tame and underwhelming and did nothing to impress Skinny or his associate, Wolf.

Before their second show, Skinny and Wolf paid a visit to the performers in their dressing room. They gave the boys an ultimatum: “show us the funny stuff or you’re done.” Frantically, Jerry and Dean scrambled to put together an act in a matter of hours. They took wrappers from pastrami sandwiches they had eaten for dinner and, dodging grease stains with a dirty eye-brow pencil, Lewis began jotting down the vaudeville routines and jokes he could remember from watching his parents (two seasoned performers) on the Borscht Belt Circuit. Jerry said to Dean: “whatever happens, I’m the stooge. If you’re the lumberjack, I’m the lumberjack’s assistant. If you’re the golfer, I’m the caddy.”

“To look at them, they hardly made a natural pair: Dean with his leonine beauty and slow, assured touch with a song or a joke; Jerry gaunt and gangly and hysterical and screeching like a klaxon horn.”

They went on for the 2am show; a bigger crowd, the pressure mounting. Whatever they did that night is, once again, undocumented and unrecorded other than accounts provided by Lewis himself. According to the late comic, the two went on to do two hours and twenty minutes of rioutous material that had the audiences bowled over with laughter. Whether it was one hour or two, what we do know is that it was a hit. They had found that lightening in a bottle.

Skinny extended the boys’ contracts on the condition that they replicate what they had just come up with. They were still billed separately — but what audiences would get upon entering the doors of The 500 Club was an unexpected and off-the-walls spoof of what Hope & Crosby and Abbott & Costello had spent years perfecting before them.

“I saw what I thought was the funniest ad-libbed thing I had ever seen. It was a riot and we never stopped laughing.”

In January of 1947, after sorting it out with their agents, they became a legal team — Martin and Lewis. The duo’s demand continued to grow and they went from earning $250 a week to $15,000 a week in a matter of months. Not since Charlie Chaplin or Frank Sinatra had the world seen fandom grow as quickly and as passionately for an entertainment act. The success of this musical-comedy team was unheard of and unseen at the time and wouldn’t be seen again until Elvis Presley swept across the nation in the late 1950s.

“They were sensational. Jerry was a wonderful all-around clown. I wouldn’t say he was a great talker, but physically, facially, and everything, he was a riot. And Dean onstage was dynamite—a charming guy. A guy with style.” 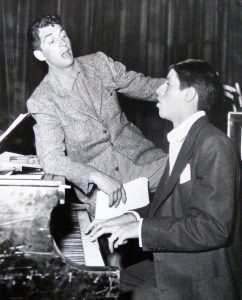 In June of 1948, Martin and Lewis debuted on The Toast of the Town (later called The Ed Sullivan Show), introducing the world at large to the comedy team. And the world was swept away. Hollywood noticed and began calling, casting them in a film adaptation of a beloved radio show, “My Friend Irma“. The success of Irma led to a sequel and 10 other Martin and Lewis films that audiences clammored to see over the following decade.

In 1950; four years into the Martin and Lewis comet that was firing through earth, the pair hosted their first episode of The Colgate Comedy Show — a brand new, televised variety show that brought the live, improvised antics of their nightclub act into the homes of Americans. Their episodes would go on to become the highest rated in NBC’s records at the time and, on more than one occasion, knocked Ed Sullivan out of the top-rated spot.

Their incredible partnership spanned a decade and in that time, they went on to dominate nearly every medium. Their faces, jokes, gimmicks and personalities appeared in comic books, note pads, puppets, lunchboxes and games. They starred in movies, TV specials, nightclub engagements, radio shows and more. The public simply could not get enough — as is evident from famous footage of the duo at the window of their hotel room in 1951.

As their bank accounts and fame grew, so too did the inevitable frustrations of any close friendship and working relationship. Jerry was the featured star of the act in every review and news piece–a habit of journalists, producers and promoters that seemed to become more and more prevalent with each passing year. Naturally, Dean grew to resent this and searched for ways to be taken seriously as a singer — something that was near impossible next Jerry’s incorrigible clown. The final 10 months of their partnership, at the height of their fame and popularity, had them barely speaking to each other. Explosive fights on set, visible tension and rare public appearances had audiences across the globe wondering what would happen with the pair.

Martin & Lewis finally split in 1956 — 10 years to the day from when they first started out and 1 year before Abbott & Costello would call their own partnership quits. But even a year later, the Martin and Lewis breakup would eclipse Abbott and Costello due to the sheer pain it seemed to cause both the two men involved and the audiences who adored them across the globe. At the time of their split, they had millions of dollars held up in movie contracts and theater bookings. The Martin & Lewis machine had more than a few good years left in it, yet they were pulling the plug while they were still on top. Their final farewell performance occurred at the Copacabana on July 25th, 1956. They closed their act singing: “You and me will be the greatest pardners, buddies and pals.” After that, they exited stage right and stage left and wouldn’t speak again for 20 years.

Both entertainers immediately dove into films to make good on the broken Martin & Lewis deal with Paramount (they were contractually obligated to produce a certain number of films before the deal was done). Dean Martin would later go on to become a high-flying member of the Rat Pack with pals, Frank Sinatra and Sammy Davis Jr,. Jerry Lewis grew to become a mammoth in the film and comedy industry and, between the years of 1966 and 2010, would serve as the Chairman and Spokesperson for the Muscular Dystrophy Association, bringing his now famous telethon to life in Las Vegas each year.

In a testament to the skills of these two talented individuals, both men went on to have hugely successful careers at a time when many people wondered if one could survive without the other.

In 1976, Frank Sinatra famously surprised Jerry live on his telethon by bringing out a surprise guest to huge audience fanfare from around the globe: Dean Martin. It was a reunion 20 years in the making; two older men, with years of wisdom and experience in their glossy eyes and silver hair, hug and kiss each other on the cheek. It’s a touching moment made all the more powerful with the knowledge that this is the first time they’re seeing each other in 20 years.

They spoke occassionaly after the reunion; a few phone-calls here and there. In 1989, in what would be their final public appearance, Lewis surprised Martin at a show honouring the crooner’s birthday, emerging from the wings with a large cake.

“I love you, Jer,” Dean said in front of the audience.

Jerry replied: “Why we broke up, I’ll never know.”

The two embraced, closing the book on a story of friendship, loss and forgiveness.