Dean and Jerry: What Might Have Been was first performed on July 16th, 2016 at the Algonquin Theatre in Huntsville, Ontario. It’s first official run was at the Orillia Opera House from July 20th to August 5th, 2016.

On a summer’s night in 2015, a show was running on the boards at the Orillia Opera House and general manager Wendy Fairbairn and I were discussing our next season. It’s always an odd thing to do, talking about the shows we want to do twelve months down the road while one we’ve built is onstage in the studio theatre below us. The audience laughter is rolling beneath our feet while our imaginations are a year away. It’s like time travel. We were talking about Derek Marshall. Derek is a terrific singer, with a unique charm and powerful charisma. We had worked together on a Christmas show I’d written a few years back, and Wendy and I wanted to get him back to the OOH. We kicked around a few thoughts but nothing jelled. We went back to our own offices to ponder. (I keep a bottle of scotch in mine, like Lou Grant.) 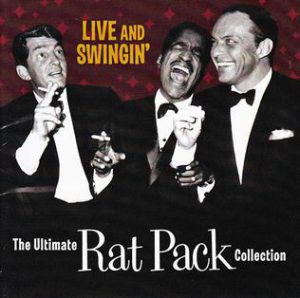 Over my desk is a classic photo of Dean, Sammy and Francis Albert. I think the picture was taken backstage at Carnegie Hall – it’s the iconic image that’s on the Live and Swingin’ Rat Pack album cover. They’re laughing at a joke that I’m guessing was too risqué for the show.  Looking at it, I thought about how playful that high-flying period had been, even though it’s legendary for music. And then—out of nowhere—Martin and Lewis. Dean Martin and Jerry Lewis – the comedy team that sang. As a kid, I had seen reruns of the Dean Martin/Jerry Lewis movies, old footage of their tv shows and their talk show appearances as solo performers. They were part of our cultural DNA. I remembered that Derek mentioned he had performed Dean Martin’s material in concerts before. A quick web search didn’t turn up any current Martin and Lewis tribute shows. That was odd. It seemed that every other rental of our space was a tribute to something. But there weren’t any Martin and Lewis shows to be found. 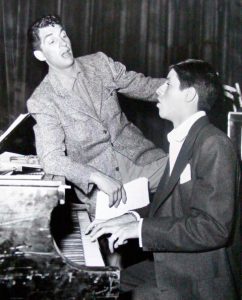 I called out to Wendy, “Do you remember Martin & Lewis? They had a great run – and then they had their own careers. What if it was a concert show where we cover their years together, highlight their split and then … bring them back together again for a ‘reunion’ somewhere in the mid-1970’s? I’m going to call it Dean and Jerry: What Might Have Been. Too weird?”

“Sounds great. Just don’t spend too much money.” One of Wendy’s qualities as a producer is that she doesn’t get unjustifiably excited. But I could hear in her response that her curiosity was piqued. That was also the full extent of the pre-production pitch and follow-up discussion.

With Wendy’s green light, I started thinking about the structure of the show. I read some more about their relationship, their story, their stardom. It was a treasure trove of music, comedy and natural narrative. Derek was perfect.

It wasn’t until that night at 2am that I sat bolt upright in bed and said out loud – who the hell do I get for Jerry?

My original thought was that finding a Jerry would be easy. Doing an impression was a breeze – just scream: Hey, Lady! But I wanted someone who had a real sense of the character. Someone who was more of an improviser or nightclub comic than an actor. But the story-telling needed to be more drama than lecture, so acting needed to be part of the package, too. I reached out to a friend, stand-up comedian Martha O’Neill. She knew a lot of comics and improvisers, and I thought she could put something on Facebook. This is the copy I sent her:

Our Jerry needs to be a clown and dynamo, comfortable with improv and a natural at the fifties nightclub feel. He needs to sing: Jerry had a #1 hit record, Rockabye My baby with a Dixie Melody, and did a ton of duets with Dean Martin. This does not need to be an impersonation, per se. We’re telling this story through songs and sketches; we need to capture the essence of the performers, not necessarily impersonate them.

She posted it to her Facebook page on December 4, 2015. At 7:15am the next morning I received an email from a young guy named Nicholas Arnold. Apparently, we were both early risers. He told me about his admiration of Jerry Lewis from a very young age and his experience performing the King of Comedy’s material. He sent some videos, and they were fantastic. He was the right age, the right type of performer – he had a lot of promise. But for practical reasons, we needed to have auditions just to have all the bases covered.

“I was in the presence of magic.” Jerry Lewis once said about Dean Martin’s natural comedic style. I know the feeling.

We auditioned Nick and a few other contenders later in the new year. Derek and I knew that it was mostly just to get a sense of who Nick was. Basically, if he wasn’t bonkers, he had the gig. Well, he clearly wasn’t bonkers. He was brilliant.

I’m not old enough to have been at the 500 Club in 1946 when Dean and Jerry first stumbled into the shtick that would define a decade, so I can’t know for sure what that experience was like. But I know what it was like at the Ryerson rehearsal space on Gerard Street on a grey January day when Derek Marshall and Nick Arnold began to improvise while singing That’s Amore. I could feel the start of something very special: it was magic. 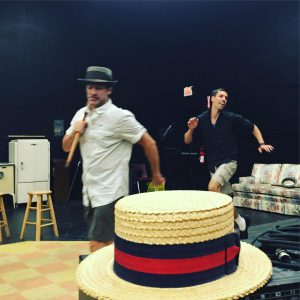 With the gorgeous arrangements of our collaborator and music director, Meredith Zwicker, we went into rehearsal later that summer. I had the structure written, and the first act was—I thought—locked. But Nick and Derek took my bash at Jerry and Dean’s stories and began to add their own voices. The structure remained intact but their own approaches informed their dialogue and patter, and the songs grew out of improvised antics. In that hot rehearsal hall, they became a comedy team, and we were all along for a beautiful ride. All these dozens of shows later, each performance still holds the possibility of something new, something crazy. Every time they do it, it’s a celebration and audiences go wild. I couldn’t be more proud of what we’ve built. And it just keeps getting better.